OK, I Admit it; I Really, Really Love Baseball Cards

OK, I have to admit it; I love baseball cards. I have placed myself in just such a way that I am over my head with stacks of cards that I've been buying nonstop. I'm not talking junk either. I am talking 84 Topps Traded Set, and 12 pounds (yes, 12 pounds) of card assortments. 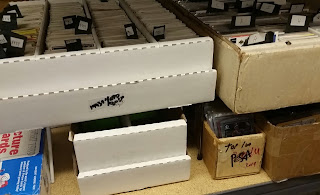 If I only spent more of that time listing cards on the site, you'd have even more variety and I'd have more room. Somebody stop me, please !!! 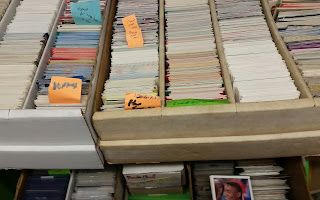 A few of our latest additions:

The list goes on and on, including a slew of new Kris Bryant cards.
Check it out and help me clear some space by visiting CardboardandCoins.com

Also, note that the Long Island National @ Hofstra is coming up on 4/16 & 4/17. The show is run by JP's Sports & Rock Solid Promotions. Every show get's better than the one before, and that is due to a group of guys that dedicate their hearts and souls to this. I've seen time and again how they remind us that it's all about the kids. Great example of good folks in our industry, and the name "Rock Solid" fit's them just right ! Check out more info on them and their shows at www.nyshows.org

Regards,
Your friends at CardboardandCoins.com
From Baseball Cards to Wheat Cents, and everything in-between.
That includes all Major Sports, as well as Comics and Pokemon Cards
All US Shipping is FREE, Always
....and there is NO Minimum Order Size!!
www.CardboardandCoins.com
at March 31, 2016 No comments:

Hi folks,
Mike Trout here. Just kidding!
Or am I?

Every generation in baseball has that one player who stands out leaps and bounds above the rest. When I say this, I mean not only because of their ferocious swing, lightning fast speed, or their ability to wrap it all together with a friendly smile and confidently happy laugh. I don't have to tell you about a personal favorite during the last phase of this evolution, but I should mention his name; Ken Griffey Jr. Always smiling, happy to be alive, present in the moment realizing that he is in the midst of living "The Dream", and knowing his age and not taking one single moment of it for granted. Close seconds for this honor were both Mike Piazza, and being the Anti-Yankee, I still need to be impartial here and say Derek Jeter. Strong, Silent leaders, both team captains with a warm-hearted smile and both mentally present in living their dreams. Not to mention, some pretty fast-moving Rookie Cards!

Now, back then, Griffey was spread all over the place, aside from multiple types of cards, from mainstream to the rare type, he was just the smiling face of baseball. A big kid. Now, granted that the Internet was growing during Griffey's reign on the diamond, it cannot even compare to the internet saturation of today.

With the country very pleased seeing Piazza and Griffey voted into the Hall, and with an eye towards Jeter's turn at the Hall in a few years, American media and fans have scoured the playing fields, and they've found their man....the new smiling face of baseball.

So now, with the way the world is interwoven like a huge quilt, Mike Trout is everywhere. Being in a good mood one morning, I think I heard someone say, "Hey, check out the Mike Trout smile on that dude over there". I went to the doctor with a cold and the doctor asked me, "I guess you don't feel so Mike Trout today, I'm guessing". Really? Or how about the new puzzle for the ages; who would win in a fight, Mike Trout or Paul Bunyan. Here is my answer....Babe's Blue Ox.

Now, don't get me wrong. I respect what Trout has done. It is immense. When you can hit close to .300 and 41 Hr's and it's considered a close to average year for you, that's abnormally good. And being young at heart, I think he is taking in every moment of this and living it now!! That takes good upbringing and a sharp head on your shoulders. The fact that he's a New Jersey fist-pumper instead of a New York guido, well, ok, he's got one strike against him! Seriously, a cool guy from what I can see in terms of mutual respect he shows reporters and the fans and folks around him. Trout is the real deal, he's here to stay, and he is destined for the Hall of Fame, absolutely!!

Now, not running too far behind him is one of the coolest guys to hit the diamond, Bryce Harper. Ok, now let me be straight up and honest here; I was not the biggest fan of Bryce Harper just because he was just another guy hitting 30 home runs and batting in the middish 200's...basically, a batter that you can pull out of anywhere in the world. Not such a big deal when you need him to come up with a key hit, and he's a 1-for-4 kinda guy.

However, after seeing Harper's consistent performance in 2015, from the beginning all the way through to the end, I have to make a few observations here, but let me stand up and say this; Bryce Harper you really are impressive! When you can walk off that field at the end of 2014 and you come back the following season hitting almost 60 points higher, all season long, you are truly a remarkable hitter. Now here is my observation which is that from the end of 2014 up until the 2015 season, Harper must have devoted 5 - 6 hours every single day in the cage hitting, hitting, hitting, and honing his eye for Balls and Strikes, so now when he's at the plate he sees a huge red beach-ball coming down the pipe instead of a tiny baseball. Now, without stating his name here (Umm, Papelbon, CEO of TEACH-ME-TO-MIND-MY-OWN-BUSINESS Inc), I and many others can see clearly how sitting out that one game gave Gordon and Arenado the opportunity to lift their average and season HR totals, respectively. Nonetheless, you rock, bro, and the word "Triple Crown" looms ahead for you.! One last note on Harper; he stated during the Post-Season that he's glad the Met's won (the Division, Pennant) because we faced the Nationals fair and square each time, and that is the mark of a true gentleman, for being mature enough to see past the friendly rivalry, and to see the bigger picture at then end of the season.

So, miles of smiles from Trout and Harper, but Trout smiles more, thus the spread of Trout-mania. Let's just stop for a moment and think about the lives that Bryce Harper and Mike Trout lead, and let's stand back and realize just how amazing this is at their age.

By the way, when folks start using Mike Trout in place of saying "Top Dog" or"King of the Hill", please remember this post!

As a shout out to Mike Trout and the previous smiling icon of baseball, Ken Griffey Jr., here are some of our newest offerings of these players:

Regards,
Your friends at CardboardandCoins.com