Hi friends,
I hope you're all having a great week so far. Lots of exciting things happening in so many sports that I have whiplash from all of the channels and TVs I've got going!

In terms of MLB, Trevor Story, is of course, the captivating story of the moment, but ever the die -hard Mets fan, I recall former 80's Met Danny Heep, a virtual blip on the radar unless you are from New York (or Houston), when he took a .400 batting average into late April, early May, before fading back into the shadows.

Now, the 'Conforto Factor', which I named after Michael Conforto, is what I really want to tell you about. Conforto, a very young rookie with the Mets, joins a cast of young players, including fire-baller Noah Syndergaard, who we'll refer to as "NS" for sake of making too many typos. NS is on fire, and my prediction is that a no-hitter is imminent for him....this season.

However, there is one factor that simply awes me, and it is not the power and consistency that we want in our hitters, both of which Conforto has. It is the "no fear" mentality with eyes always open watching and observing. Mike Trout has this. Bryce Harper has it. Going further back, Tony Gwynn certainly had it as well. It's almost as if an older, wiser soul resides within him. Pull up some of his at-bats online. How can he take pitches like that and know they are not strikes? He's a tough out, and he makes each pitcher earn their pay. Let me be clear. He's 23. What 23 year old has an eye like that?

Last Fall, with the Mets down to their final out in the World Series, the pinnacle of pressure in Sports, Conforto was up at bat. The first thought is hostile crowd, huge pressure, rookie.....equals strikeout. Nope! Conforto hits a single, and extends the game one more batter before the ugly ending. But the point here is, folks, this kid has got it. When you can have that kind of cool, calm, collected mentality, along with hitting home runs with exit velocity readings of 115-118 mph off of his bat, you've got a winner. 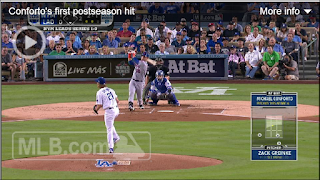 A Shout Out to MLB.com for this image!

Taking all of this into account with the Media spotlight in NY, the World Series run the Mets will be making again this year, I have started investing a lot in Conforto rookies, whether they are Chrome or Base Set cards. So, for the many folks that have been E-mailing me on our site, www.CardboardandCoins.com to ask me, I just cannot part with any Conforto cards just yet! It's that darn 'Conforto Factor'! Funny thing, I am not alone in this, as I spoke to 2 friends that are industry "heavies" and they are doing the same exact thing. The "factor" is real!

I have been putting plenty of Mike Trout cards up on the site, and you might want to check back as we are constantly adding more inventory with over 200,000 cards in stock.

Who are you investing in? Which young players show you the most potential. I'd love to hear!

We welcome your feedback, but we do not permit URLs and links to other websites. All comments are moderated before approval.