The Worst Advice About Baseball Cards I've Ever Received

They say it's good to dwell on the positive things in life, but sometimes, it's healthy to hop over to the dark-side for a bit and reflect on some of the wacky (but with good intentions) advice I've received over the years regarding baseball cards, from buying, collecting, investing, and selling. I'll share some of these events chronologically so you can appreciate the time and setting in which I was the recipient of these tidbits of advice.

Well, about 30 years ago, my aunt and uncle used to come over to my house a couple of times per week, and they brought up the idea that I was spending too much time organizing my cards, building sets and preparing for and selling at card shows. They started hinting about how it might be best for me to start tapering down my collecting habit, since it might be hindering my schoolwork, and really, where was I going in life by collecting and selling baseball cards? Why was that bad advice? What a 15-year old should not do is talk back, so I decided to keep on with the cards, since I was carrying a 90 average and I always finished my schoolwork before working on my cards. Yakkity Yak, don't talk back! So, the breaking news on that advice they gave me is that the college degree looks great on the wall and I am proud of it, but that baseball card "habit" of mine has been working out pretty darn good. It's slightly evident to them and I make sure to slip a baseball card in their birthday cards and their anniversary card every single year. You see that? Baseball cards do bring smiles!

During the years of 1986-1991, an era that some folks in the business refer to as the over-production or "junk" years, I had conflicting advice from some fellow collectors. I was warned by some as if I was to avoid the bubonic plague to not throw a single penny into cards until the printing press slowed down. Of course, I did not heed that advice. Good thing, because if you do a quick eBay search for 1987 Topps Baseball cards and select only "sold items" and eliminate Tiffany cards from the search, you will see some pretty high selling prices for cards that folks wanted to wallpaper their homes with. That is selling prices as both graded and ungraded. I'm stocked to teeth and now the waiting and patience is starting to have a value attached to it. Listen to your little voice inside.

During that same time, I did take bad advice two times, and paid the price for it. The first time, I was advised by two collectors who followed the Minor Leagues very closely via publications that they ordered in those pre-Internet Stone Age times. They told me to put everything behind the 1988 Topps Mike Campbell cards. There was one bulk vendor, and I bought $100 worth, a lot of money for a 16 year old in 1988 dollars. Needless to say, Campbell flopped and I phased out those two woodpeckers from my circle!

The second time, I had my eyes on a promising rookie coming up through the Yankees organization, by the name of Derek Jeter. I had as much info as I could find by making calls, but I needed to get in touch with actual die-hard followers of the Yankees, since I am a die-hard follower of the Met's only! I made contact with a friend of a friend, and this fella was like a book of everything Yankees. I quizzed him on the most obscure stuff I could find at the Library (do those still exist?). He knew his stuff cold, and knew all of the upcoming prospects. Bingo! I was now 21 and had a little bit more money to play with, and I was going to plunk down $750 as an investment. He was so dead-set against Jeter, saying he was injury prone, and was going to choke when he hit the Majors, and he set out some really reasonable arguments against Jeter. He seemed valid and I took his advice. Fast forward all of these years, and I am still quite upset with myself for that bad advice, because I was going to be spreading my purchases across the Rookie Cards of Jeter from all of the main card companies, and I had a guy who had 25 of the SP Jeter cards. Yes, 25, and they were going at $8 per card (slightly jacked up New York City pricing). Oddly, I lost Mr. Yankee Advice's phone number. It's still a mystery today as to how I could have lost it

So, as you can see, I dodged some bullets, but got caught between the eyes with some others. I remember a friend in the business warning me not long ago about mixing in (selling) Pokemon Cards and Coins, in addition to the cards. He failed to realize that many folks collect a couple or all of these items simultaneously, and if you can be the person helping them get everything they need in one shot, they'll come back again and send their friends, as well.

Overall, as I said in the beginning, all of this advice was done with good intentions, but still, that was just some of the worst advice I've ever received about baseball cards.

Ummm....anybody want to buy some 1988 Topps Mike Campbell Rookies?
Many thanks and Regards,
Your friends at CardboardandCoins.com 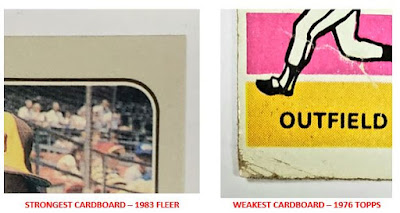